In a video uploaded through Facebook by user Mojahid Abdulmoumen, the veteran actor can be seen cursing somebody challenging to a brawl. 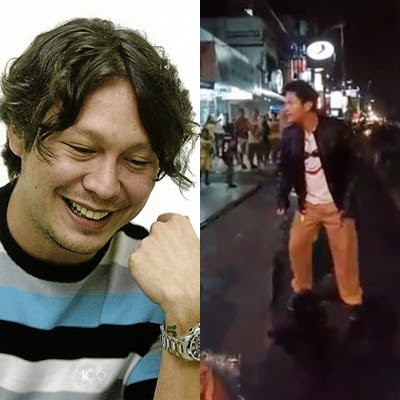 The incident supposedly happened last July 7, 2015. According to the uploader, Geisler is attempting to go inside the SkyTrax SuperClub in Angeles, Pampanga but the bouncers did not allow him to enter because the actor seems to be drunk and is acting unusual.

In the first viral video, Geisler was seen very eager to go inside the club making arguments with the bouncers, but still they dont let him in.

Then in this video, the actor started cursing, insulting and challenging the securities to a match that started to get the attention of public but, fortunately, the securities does not respond and kept their cool until the actor left the establishment.

The 33-year-old actor has previously been entangled in series of controversies. In 2012, Geisler was temporarily detained for physical assault to his neighbour but was released less than 24 hours after a mutual settlement from both parties. In 2013, he was found guilty of an act of lasciviousness against Patrizha Martinez the daughter of estranged celebrity couple Yayo Aguila and William Martinez (said incident occurred in 2008). He also faced molestation complaints from celebrities like Yasmien Kurdi, Julia Clarete, and Cherry Pie Picache.

Just this July 6, Baron Geisler appeared in ABS-CBN's noontime show, It's Showtime and participated on the game segment Ansabe with actress Nikki Valdez.

In past interview, Geisler admitted that he is struggling from an extreme bipolar disorder and is recently under a strict medication for the said illness.