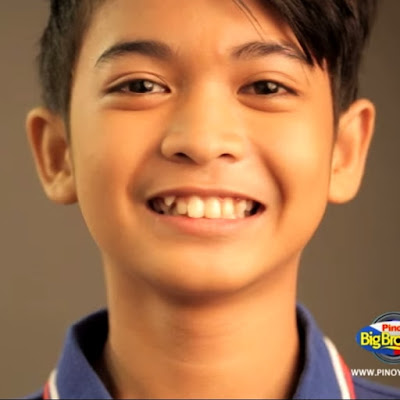 A 14-year old proud gay from the province of Cebu, Ryan James Bacalla was the first PBB 737 housemate to revealed this week as part of the #PBB737BigReveal.


Dubbed as the Kid Sunshine ng Cebu, Bacalla was first introduced on noontime show "Its Showtime" with a mask, where he sampled some dance sports move with hosts Karylle and Vice Ganda.

Then later that night, he was featured unmasked in an exclusive report on  "TV Patrol" and had his first interview in the showbiz-oriented primetime show "Aquino & Abunda Tonight" on the same day.

(2) to discover new skills; and (3) to share a portion of the cash prize to their church, the Birhen de las Remedios Parish in Labangon, Cebu.

At least he's out and proud and we won't be doubting his sexual orientation anymore once PBB737 starts airing.


PBB 737 Big Reveal is a long week promotion for the opening of the country’s most popular reality TV show. It  will reveal the list of official housemates in different ABS-CBN shows starting from June 15-19, 2015.

The top-rating and most-followed reality show in the country, conducted numbers of nationwide, international and online auditions. The lucky housemates will compete against each other to prove that they are worthy to be called as the PBB Big Winner.

Pinoy Big Brother 737 will start airing this Saturday, June 20, 2015. As of writing, they have not revealed anything about the time slot of the show yet, so keep posted!