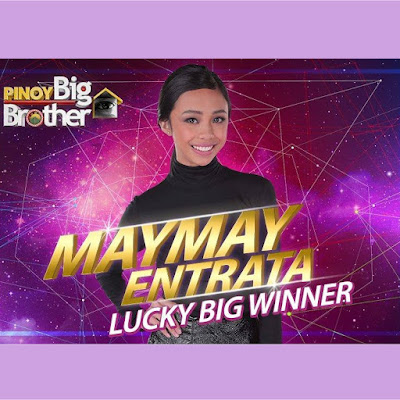 After almost 7 months of watching the longest season of the hit reality show, Pinoy Big Brother Lucky Season 7, we finally find out who the Big Winner is!


Last night, we have witnessed the live shows at the Alonte Sports Arena and we have welcomed the 7th Big Placer, Cora Waddell, 6th Big Placers, Hashtags Nikko and Mccoy and the 5th Big Placer Tanner Mata to the outside world. We concluded the night with a major announcement from the hosts of the show that the voting percentage will go back to zero for the Big Lucky 4 Teen Housemates. The continuity of announcement for the remaining placement happened March 5, Sunday.

With the digital outerspace theme, the crowd at Alonte Sports Arena breathlessly awaited the announcement of which housemate shall reign over this longest edition. Toni Gonzaga returned to her usual post as host for the Teen Big Night with Bianca Gonzales and Robi Domingo as her co-anchors. 1st PBB Teen Big Winner, Kim Chiu helped Toni Gonzaga with the announcement of winners.

Before the much-awaited announcement of winners, Pinoy ex-housemates Joshua Garcia, Loisa Andalio, Bailey May, Ylona Garcia, Jimboy Martin, Zeus Collins, Yassi Pressman, Kim Chiu and host Toni Gonzaga perform for the audiences while waiting for the tally of votes. Soon the winners were declared one after the other.

In the end, “Wacky-go-lucky of Cagayan de Oro” Maymay Entrata is declared the PBB Lucky Season 7 Big Winner after besting 11 other Dream Team housemates. Showing exceptional talents like dancing, acting, songwriting and singing, the strength of character and funny side, the 19-year-old proved to be this edition's runaway bet. 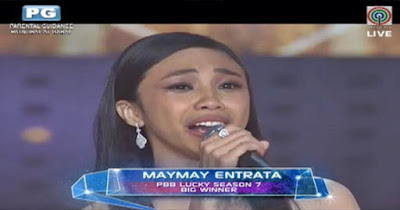 Garnering 42.71% of the total votes, Maymay could not believe the crowd's reception when she stepped on out the stage of the finale. A red carpet was rolled out for the Big Winner, who was very excited to see her mother and grandmother. Maymay won P1 million, a house and lot Camella and an Asian Tour Package.

Edward Barber from Germany came in 4th with the score of 4.49%. Yong Muhajil of Zamboanga followed him, placing 3rd with 21.52% of the votes receiving P300,000. Kisses Delavin, the Miracle Daughter of Masbate was the 2nd placer taking home P500,000. Like Maymay, they were very glad to finally see their family and friends.

Maymay and the rest of other housemates will now face fresh adventures with the start of their new lives outside the Big Brother House. Let's see how they will fare their real life challenges.

Watch out for the Pinoy Big Brother Lucky 7 housemates guesting in some Kapamilya shows in the following days. Good luck Housemates and Congratulations!